In April 2018 was the first time when Ozone Team pilots and friends visited Egypt to fly about the Great Pyramids of Giza.

After 3 years, in December 2021 the Team was back in Egypt for another 10 days or extraordinary adventure to fly at the Red Sea, Luxor and The Great Pyramids of Giza.

The event was organized by Sky Sports Egypt – Ozone Power distributor in Egypt. First location to visit was the Red Sea next to new built town El Galala, where pilots flew along the sea side and visited new and still under construction paragliding take off at 850 meters asl. This place definitely has a huge potential!

Next location was a famous Luxor – frequently called “World’s greatest open-air museum”, as the ruins of the temple complexes at Karnak and Luxor stand within the modern city. Opposite, across the River Nile, lie temples and tombs of the Valley of the Kings and Valley of the Queens. During 3 days pilot could fly above all those ancient monuments.

Emilia says: “Thousands of tourists from all around the world arrive annually to visit these monuments and we had this incredible opportunity to fly above them!”

Leah says: “The most beautiful of sights to behold.  Less well known to me I was able to fly over the city of Luxor to the temple, fly along the “Avenue of Sphinxes” to Karnak”

Johnson: “This was honestly one of my favorite moments on the Egypt tour. No pyramids, no temples, no valleys filled with archeology. Just cruising along the Nile river just off the shore next to Luxor. The morning was hazy and foggy, but if you looked for a second, you realized you are flying right next to a major city, and the architecture is nothing like where I grew up!”

Next stop – famous The Great Pyramids of Giza, where pilots were flying during 3 days. Weather conditions were a bit windy but we could fly nearly all day long.

Matias says “Such an amazing trip, being able to see so much from my paramotor is priceless, the Pyramids are incredible! You have no idea of the size of them until you fly above them”

Emilia says “We are the first pilots flying at Pyramids of Giza at night. It is beyond explanation how exiting and special that feels. Seeing Cairo city lights in the background and all those giant Pyramids with lights, what a breathtaking, incredibly beautiful view”

Thank you Sky Sports Egypt for organizing such an amazing event, all your hospitality and extra efforts to make it happen!

Cheers from all the Ozone Team! 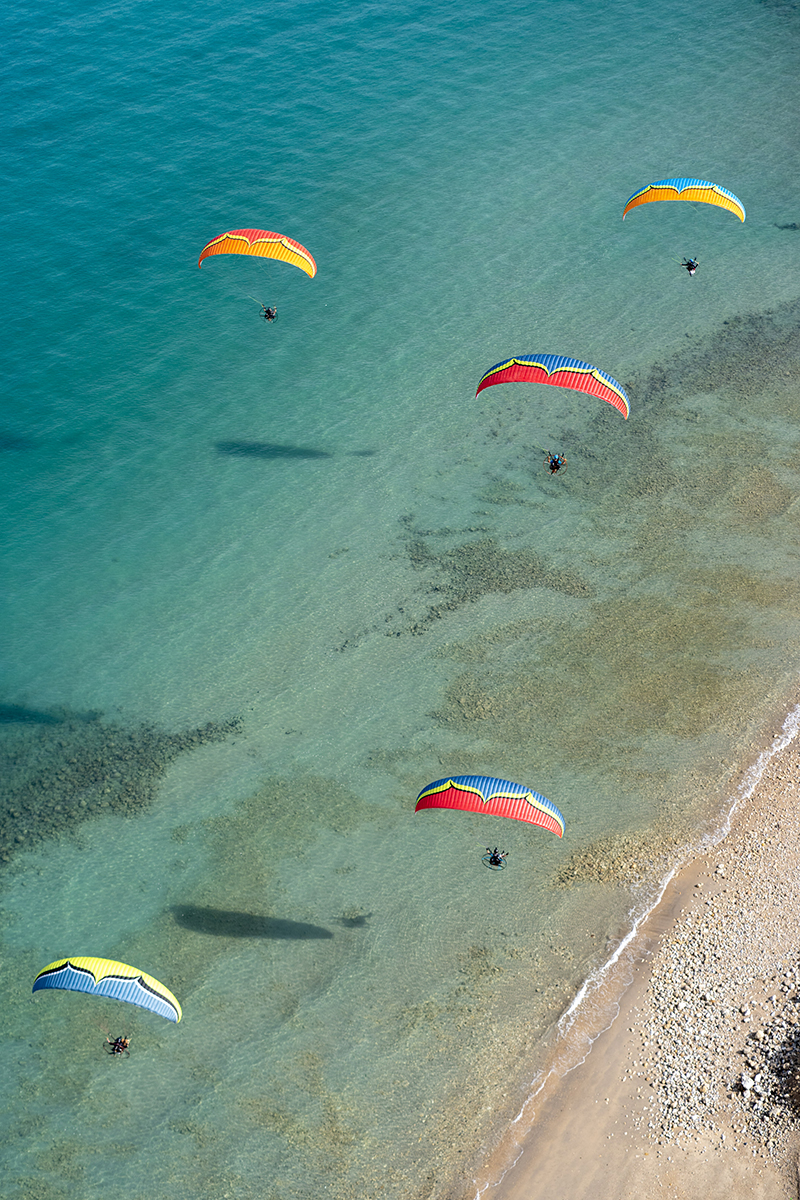 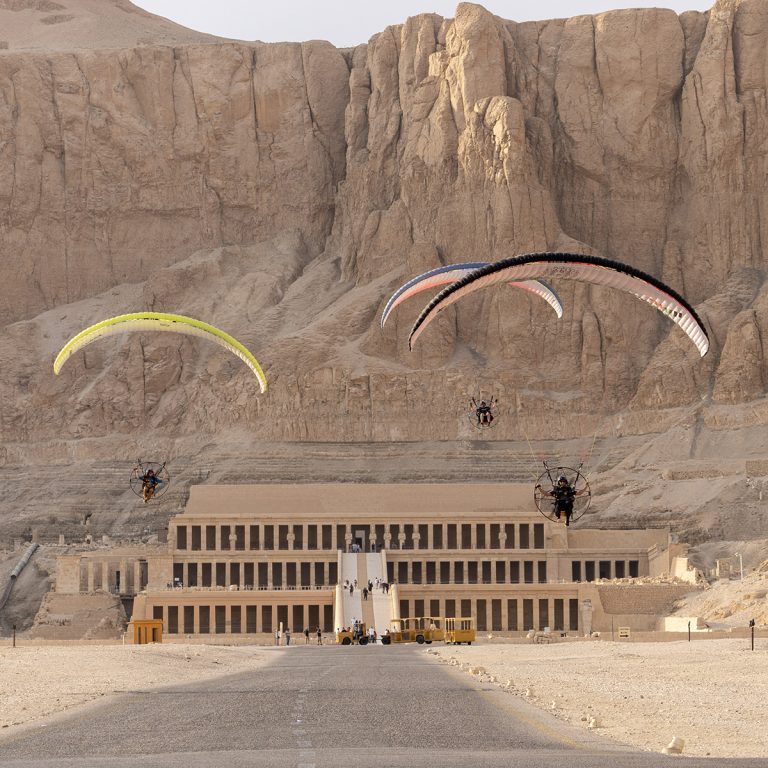 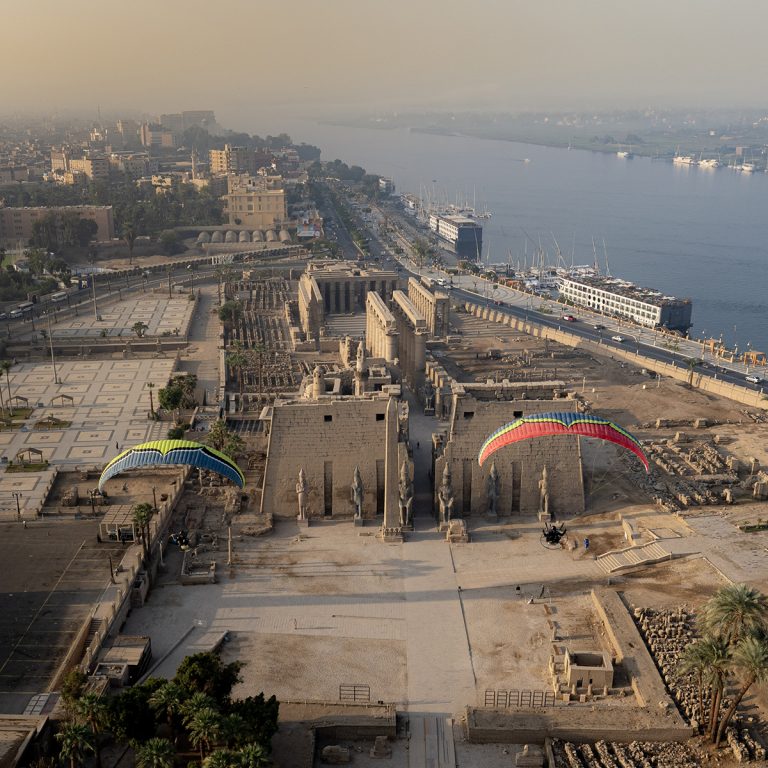 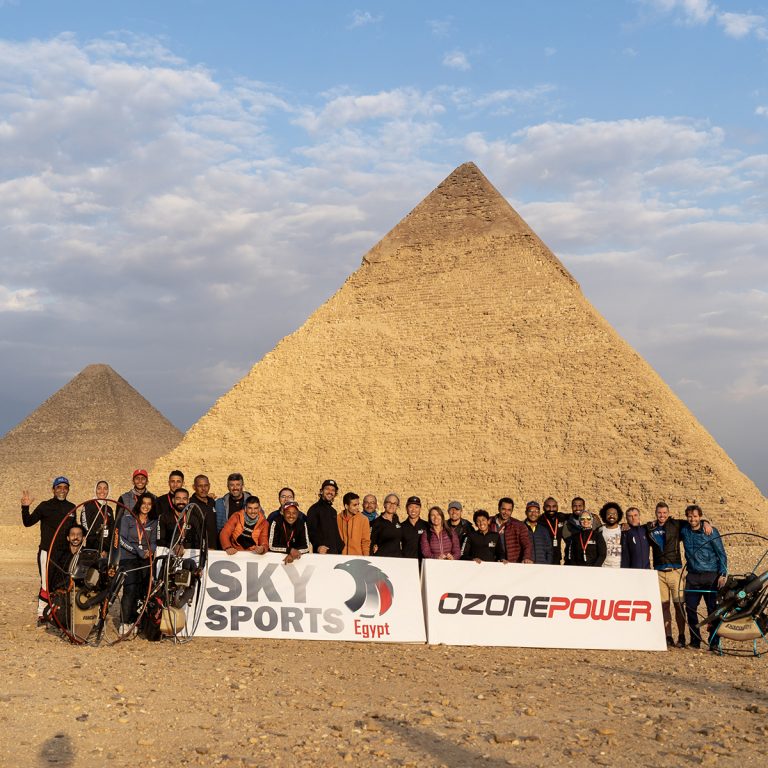 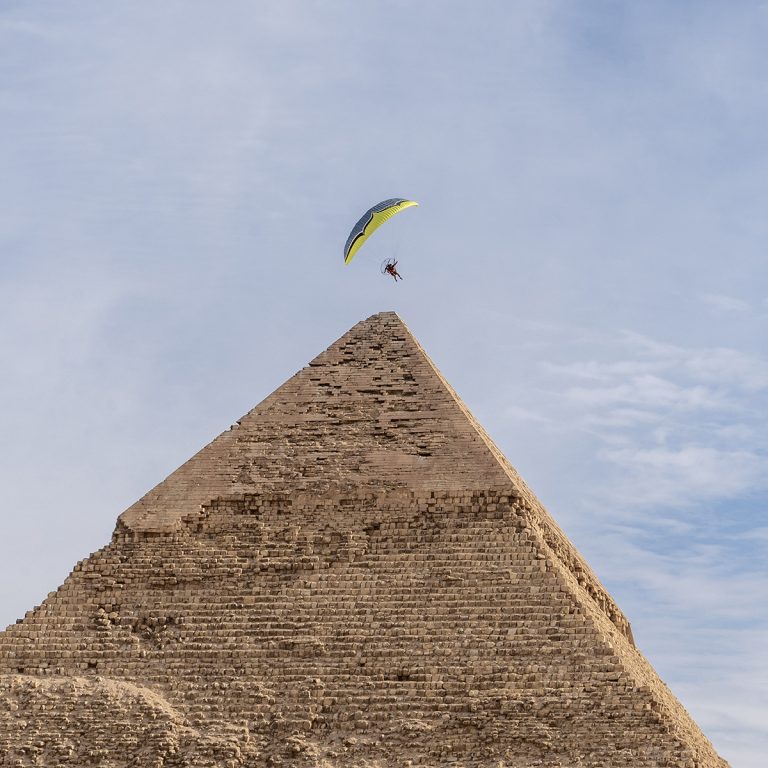 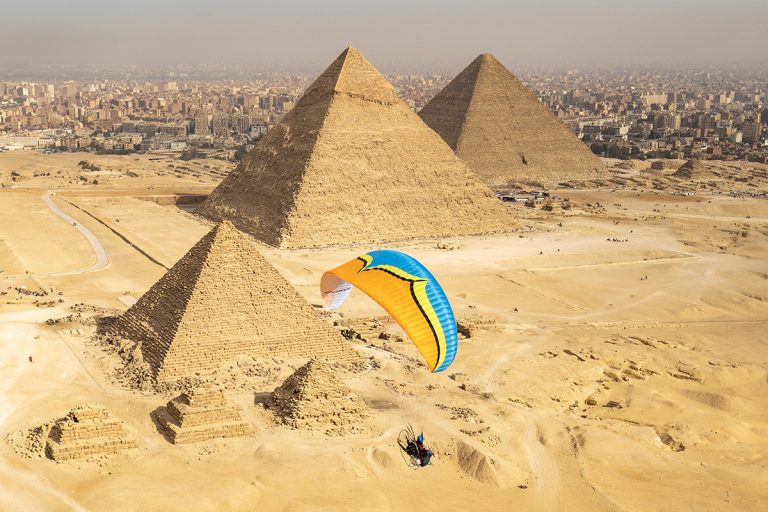 WE ARE PROUD TO INTRODUCE THE NEW TRIOX 2 !

TRIOX 2 is the most purpose-built trike wing from Ozone. It is suitable for both solo and tandem trike flying, and thanks to the easy launch and flight characteristics is acceptable for a wide range of pilots from recreational to professional.

With the new TRIOX 2 Ozone introduce the WINGLETS. Winglets provide significantly greater roll stability and improve spiral behaviour. Glider characteristics are often at odds and we are forced to make compromises in order to reach the best outcomes, but the use of winglets avoids compromise and provides the “best of both worlds” – they increase roll stability without negative outcomes. Regardless of trike type, geometry, thrust, or power, the Triox remains roll-stable!

More information about the TRIOX 2 here

12 pilots participated in the recently organized paramotor Italian Championships which took place in a small airfield near San Paolo di Jesi, Italy.  Big congratulations to the winners! We are very happy to see that top Italian pilots choose Ozone wings for classic competition.

We are looking forward to see the Italian Team in the next World Paramotor Championships in Brazil flying the new Viper 5.

Congratulations from all the Ozone Team.

The Viper 5 is a high performance PPG wing designed for experienced pilots searching for the highest levels of efficiency, speed and performance. It features the latest design elements and technology taken directly from our high performance PG and PPG development programs to deliver a super-sleek, exciting wing, ideal for XC flying and classic competition

More about the Viper 5 here

This year, except polish national team and local pilots, the event was visited by pilots from Qatar, Greece, Spain and France.

Despite bad weather pilots flew 15 tasks. Nicolas was flying a new version of the Freeride 14, which he was testing only 2 days before the event. Bartek was flying his standard Freeride 14.  Both pilots maintained high positions throughout the competition and finished 2nd and 3rd in Category Open. Bartek was the best from all the polish pilots in PF1 and won the title of Polish Slalom Champion 2021.

We are especially proud of the Ozone Team pilots considering the fact that 90% of wings flow were Dudek but still Ozone Freeride took over 2 out of 3 the highest positions!

Congratulations from all the Ozone Team. 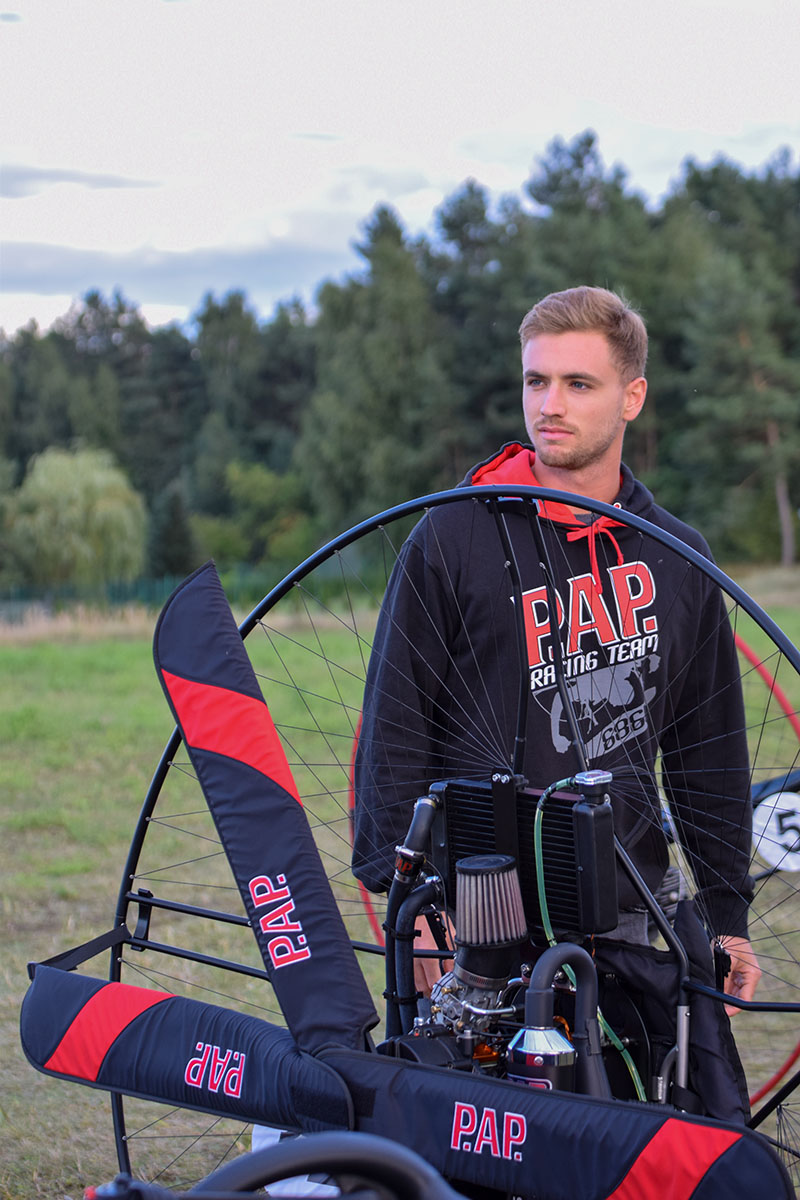 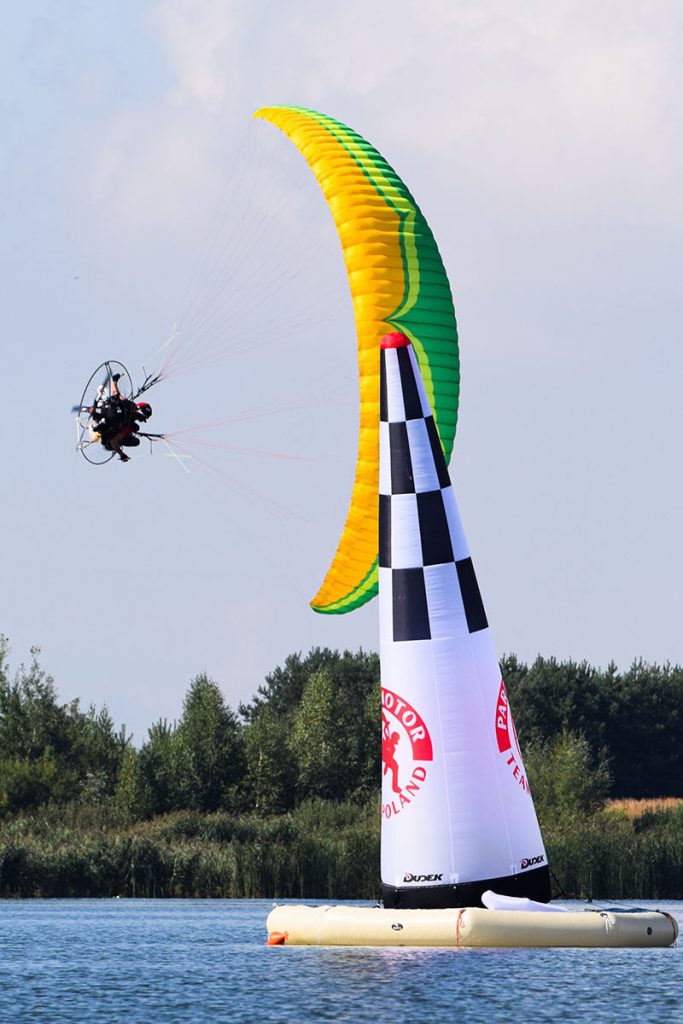 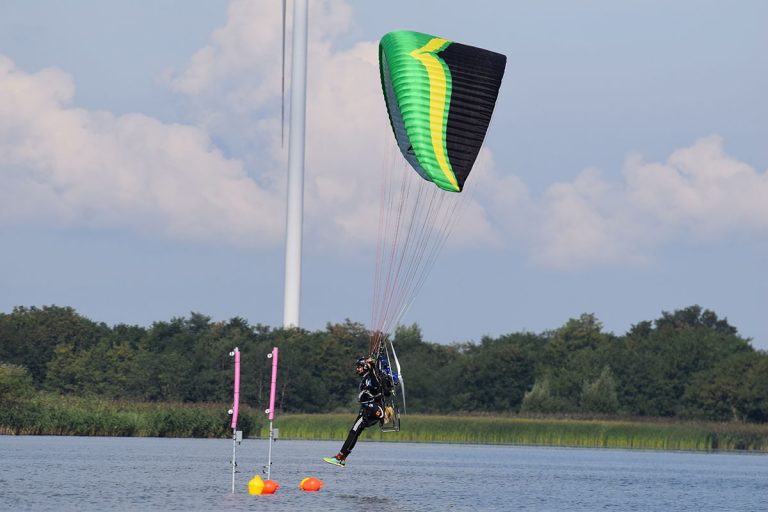 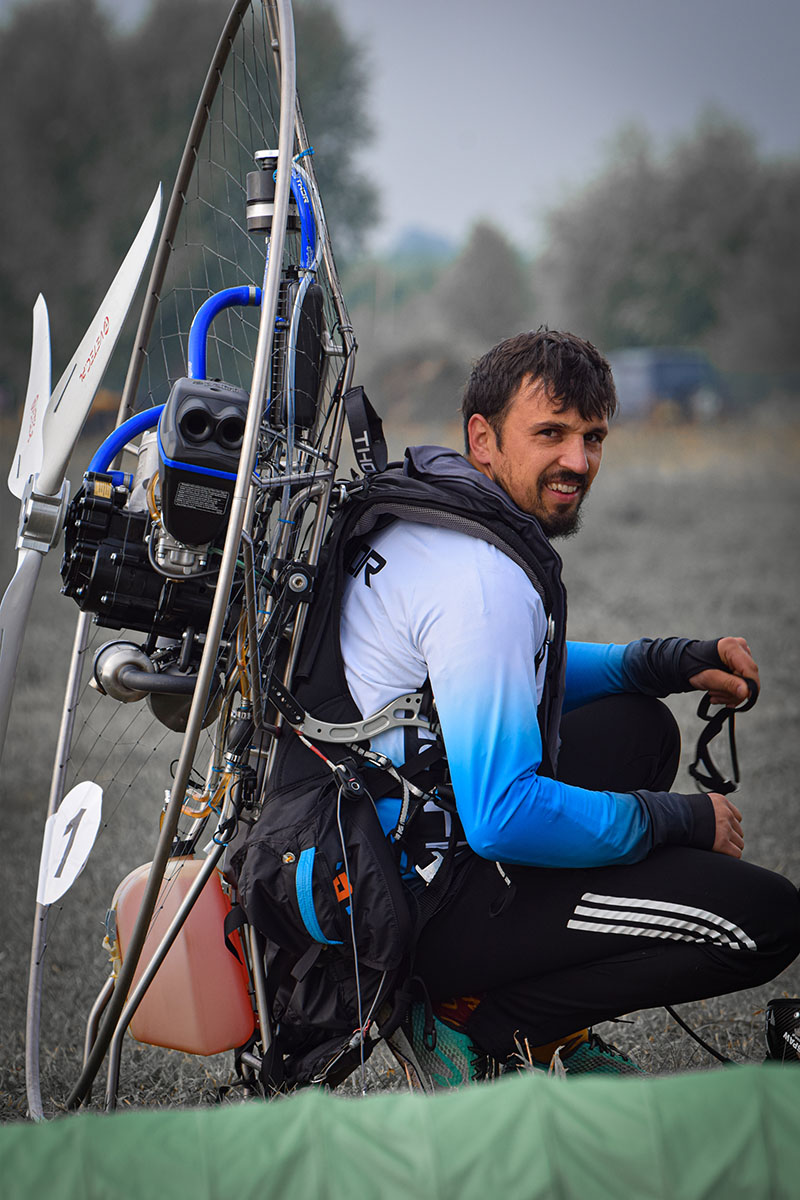 During the first week of August Ozone Team pilots participated in the largest international slalom competition in 2021 – Jutrosin Cup.  40 pilots from 12 countries attended the event including best pilots in general ranking. During 5 days pilots flew 15 tasks.

Alex Mateos (Freeride 14) was a strong leader throughout the competition, winning all tasks!  He obviously finished 1st defending his Slalom Champion title from Jutrosin 2020 (and all the others slalom competition in the past).

Bartek Nowicki (Freeride 14) and another 4 pilots competed strongly with each other and swapped places several times until the last day when final runs decided about 2nd, 3rd and 4th position. Bartek finished 4rd.

The only female pilot Marie Mateos finished on the 10th position flying her Freeride 14.

Bartek Nowicki reports: “It was very long, tiring but fantastic competition!  I am very happy to be at the top of the World ranking but definitely a little bit disappointed that I missed the podium! Obviously, I made too many mistakes during the competition so I have something to improve in next competition! I would like to thank the competition organizer for the beautiful event and my fans for their support!”

Alex Mateos says: “I am very happy to win all the tasks! But I can see that competitors are getting closer! The level of the pilot improved as well as the organization of the slalom events”

Congratulations from all the Ozone Team 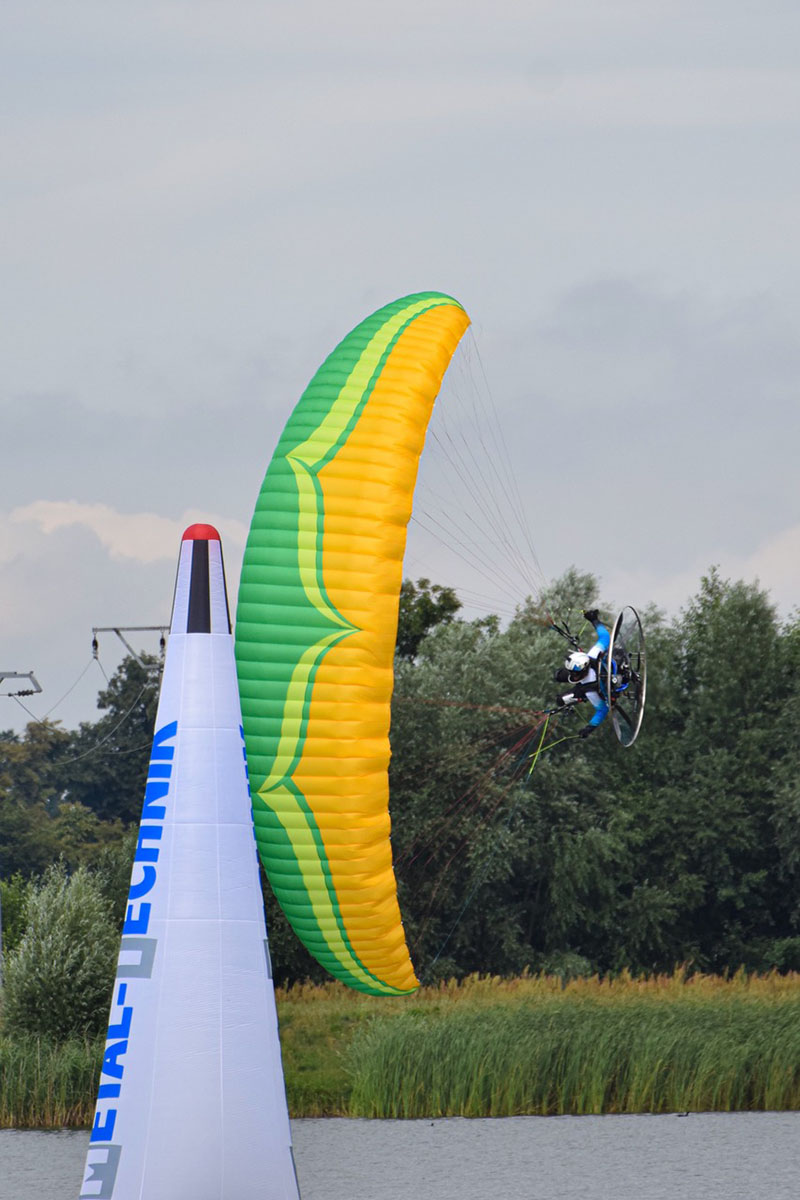 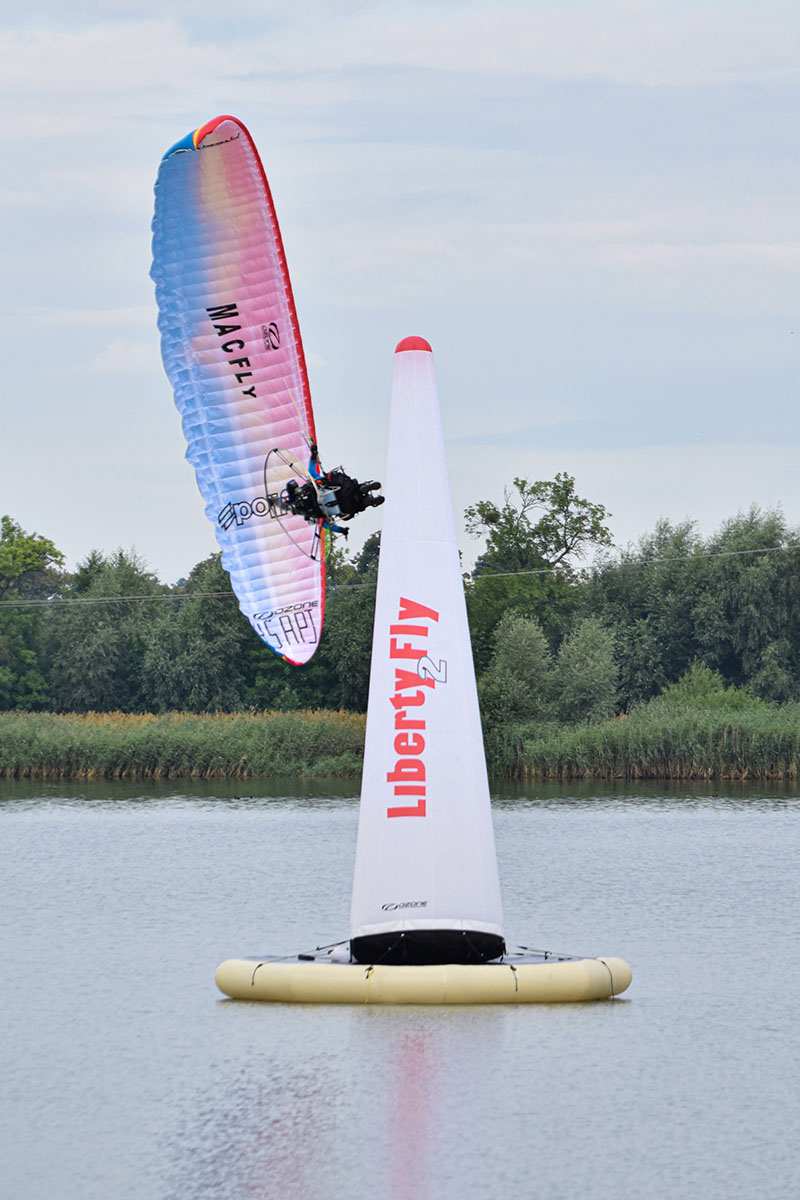 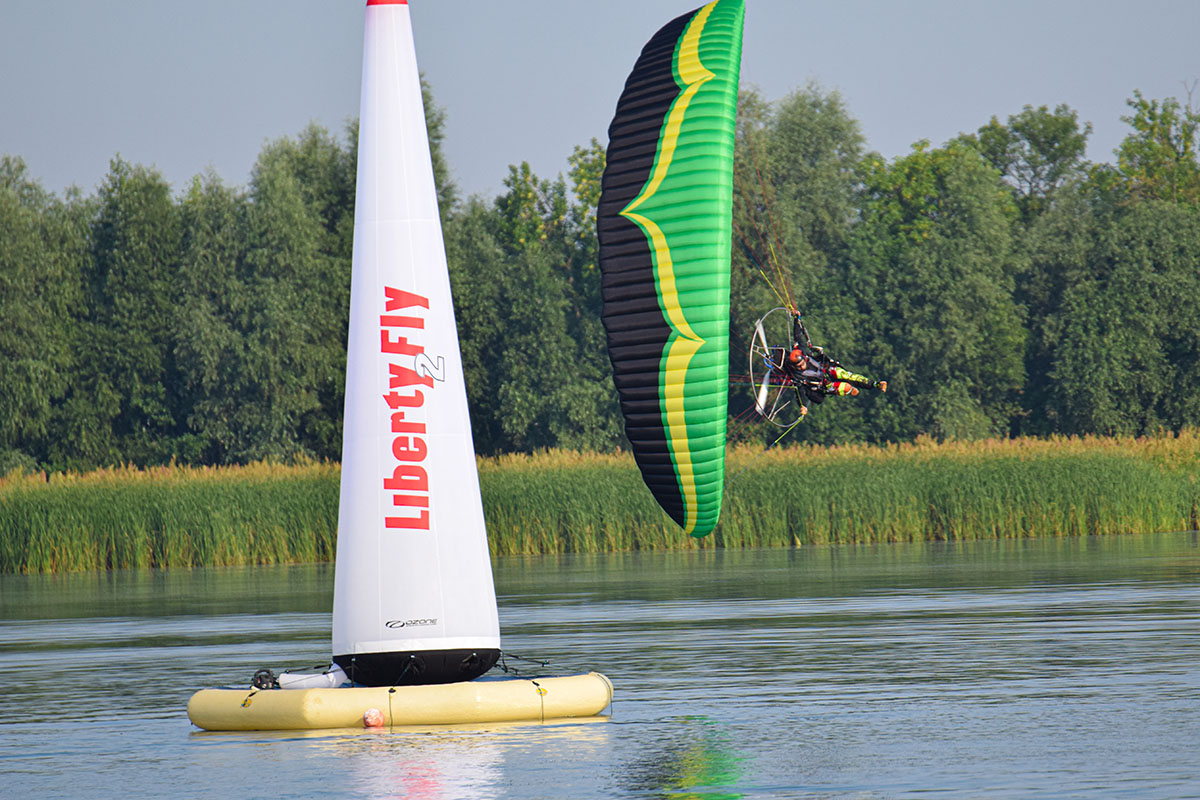 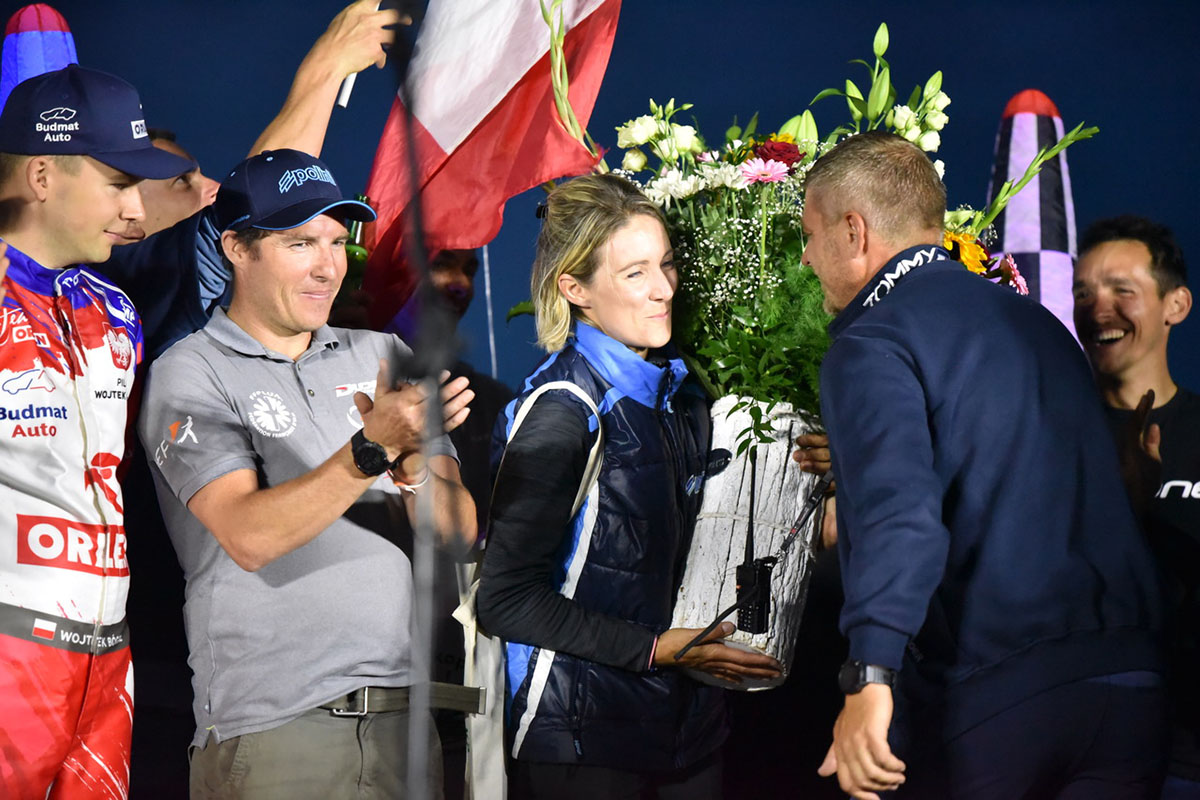 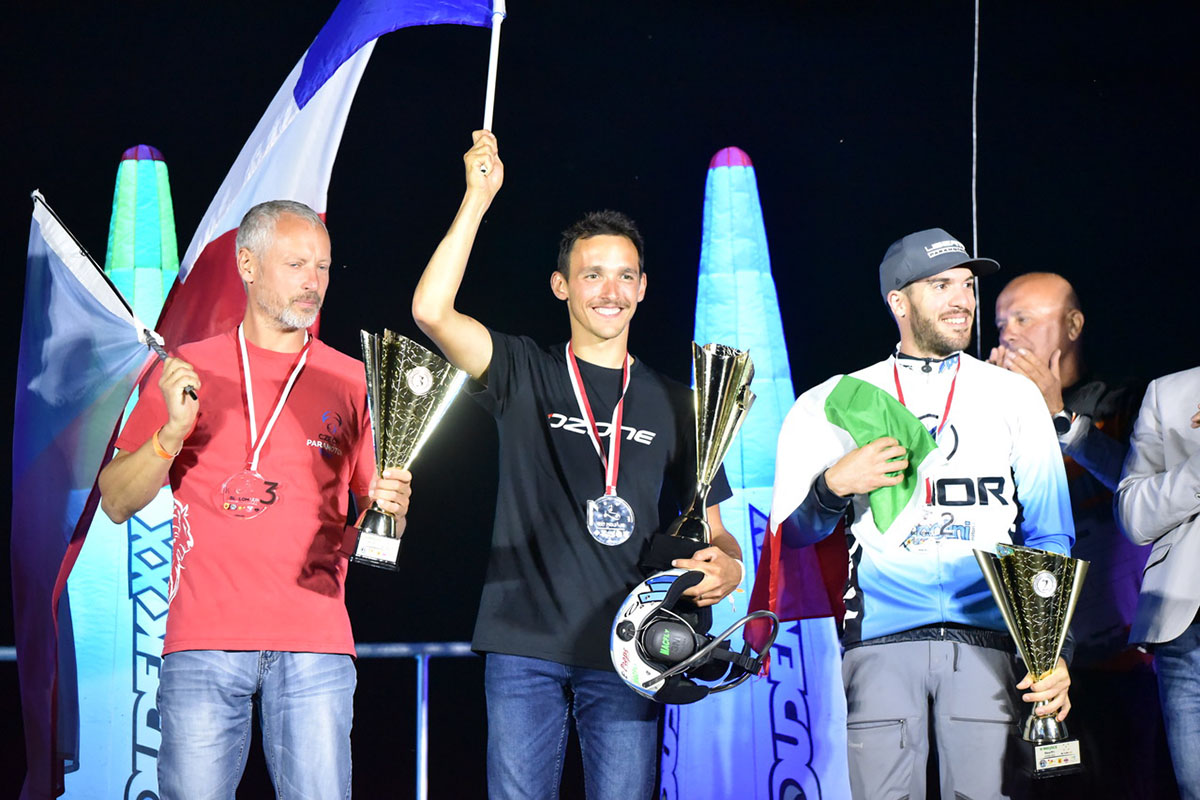 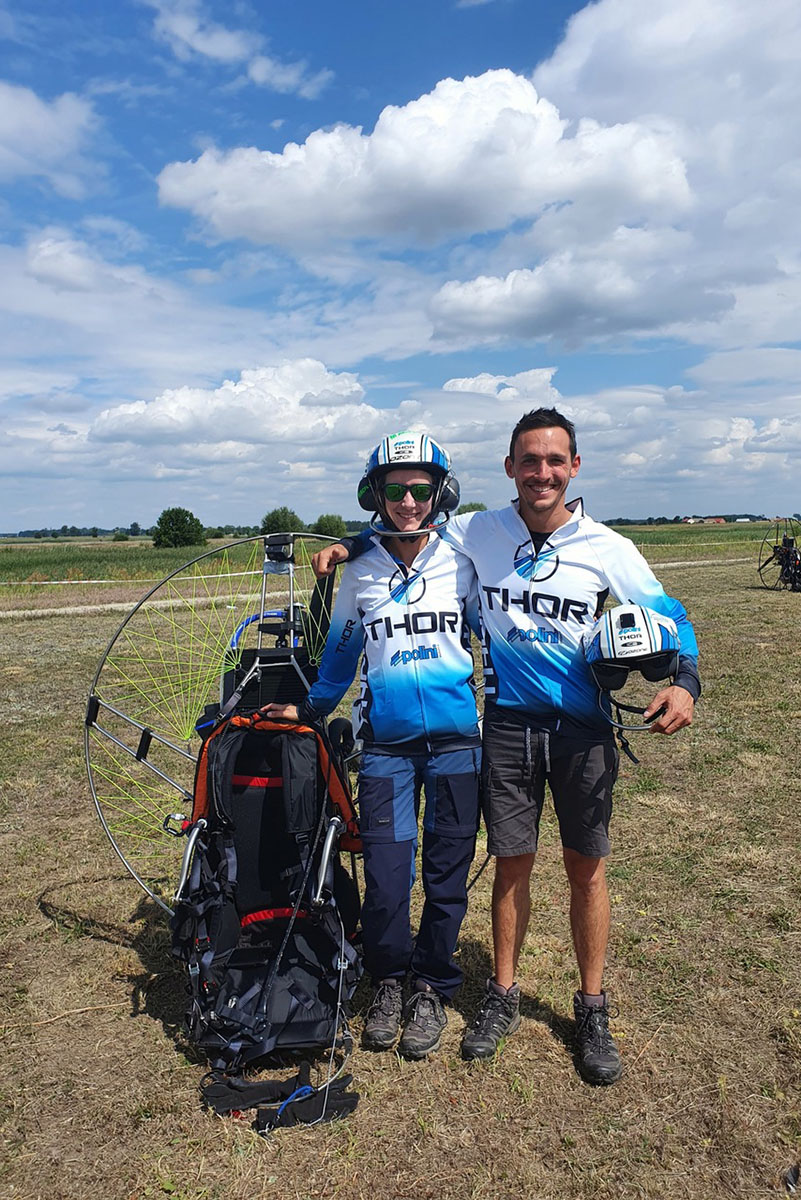 Famous paramotor couple and Ozone Team pilots, Alex and Marie Mateos won 2021 French (Classic) Championships 2021.  Alex Mateos finished 1st in overall classification and this is his 10th World Champion Title in a row.  Marie was 2nd and this is her 4th year on a podium.

Another member of the French National team – Boris Tysebaert – won the 1st place and the French Champion title in single trikes class (PL1). Nicolas Aubert was 6th in general classification. All pilots were flying the new Viper 5.

Alex and Marie report: “Receiving new wings only two weeks before the competition was a real challenge! But Viper 5 proves to be a perfect competition weapon! It’s features such as high efficiency, wide range of speed, great stability and precise handling are exactly what we need to win classic competition”

Alex says: “The Viper 5 is great fun in precision landing thanks to its amazing long flair! High top speed and stability really helped in all navigation tasks”

Weather conditions were difficult so the competition director had to run many shorts tasks during very few flyable days to get the Championships valid! Total 10 tasks were scored. This year event was visited by top pilots from Spain and Italy.

Congratulations and Cheers from all the Ozone Team

Slalom World Championships 2021 has been cancelled but in 2021 season there are a few events where top pilot from many countries have a chance to meet and compete. Bornos is one of the top locations where back in June took place The Spanish Open Championships. The event gathered over 20 pilots from Spain, Qatar, Poland, Holland, France and Greece.

Bartek repots: Bornos event gave us an opportunity to train and test new equipment. Unfortunately, top French pilots were absent, except Nicolas Aubert.  The big surprised were pilots from Qatar who train a lot every year in Bornos to be able to fly at really high level.   During one week of competition we had strong winds, which allowed to score only 5 tasks.  I was very happy to finished on the 2nd position flying a completely new gear and beat my team mate Nicolas Aubert and Greek pilot Dimitris Koliakos who was 3rd.

I am looking forward to the next round in Jutrosin in Poland!

Congratulations from all the Ozone Team

13 Pilots competed in the championship class with a further 7 more competing in the discovery class designed as a stepping stone into competition.

Ric reports: “The British Open Paramotor Championships follows an endurance format where tasks are briefed at the start of the competition and then we have flying windows throughout to complete as many of these tasks as possible.

We had a total of 14 hours of flying windows plus a limited fuel FAI triangle task, 4 spot landings and 4 skittle landings.

With 16 hours of competition flying over 3 days, this was definitely the most flying I have done in any one competition. Flying throughout the day in some very active skies the Speedster 3 performed impeccably. Its speed and stability allowed me to focus on completing as many tasks as possible, covering over 600 km during the competition. The Speedster’s precise handling and incredible glide meant I hit every spot and scored on all of the skittle landing tasks which also won me the precision trophy”

Congratulations from all Ozone Team!

Aviator PPG the biggest Ozone importer in USA has published a video review of the new Sirocco 3. In the video AJ Going one of the paramotor instructors reports his first impression about the new and describes its main features.